The spatial distribution of land use systems is determined by the physical, economic, political, institutional and technological environment. For land users this environment constitutes a set of exogenous variables. They try to optimally adapt their production programmes and land use intensities to this set of variables consistent with their economic objectives. Changing values of these exogenous variables thus trigger adjustments and may lead to changing regional land use patterns.


Recent reforms in the Common Agricultural Policy (CAP Reform) have dramatically altered the conditions under which land use decisions are made. Decoupling, cross-compliance and modulation will have a major influence on decisions for both, farmers and politicians. Expected changes in regional land use patterns and production intensities will not only affect regional production and agricultural income, but also other landscape functions such as the diversity of flora and fauna, recreational value, groundwater recharge etc. Although the implementation process of the new policy will take several years, some effects are expected to materialize rather soon. At present, empirical evidence is still insufficient. Nevertheless, decision support is needed - for farmers to meet the new challenges and for politicians because a review of the Common Agricultural Policy has been scheduled for 2009.


“Land use modelling”, however, means more than just generating aggregate information on key variables such as value added, employment etc. In addition, it should provide quantitative forecasts of future land use patterns. Thus, appropriate modelling methods are employed to produce spatially explicit information. In many cases model results have been displayed in the form of maps which exhibit potential land use distributions of the regions under investigation.
For this issue researchers in the field of land use modelling were invited to present their research on the expected changes of regional land use patterns and landscape functions under the conditions of the CAP Reform. The authors were asked to do both, analyze methodological aspects and present results of their models. The complexity of the problems have often required more than one researcher to be involved in the model building and application process, especially if two or more models needed to be interlinked.

Under the common topic of “Land Use Changes”, the papers presented in this special issue cover a wide range of questions in detail. The most outstanding difference is the modelling scale. Starting from BRITZ et al., covering the entire European Union, the scale descends to the single farm approach, presented by SCHRIJVER et al. Within these boundaries, a multitude of scales are modelled and investigated. As a consequence, some model results include statements on the multifunctionality arising from certain land use patterns. The applied methodology is mainly Linear Programming and extensions adapted to the nature of the considered problem. However, the challenge of spatially explicit modelling may require other approaches, as e.g. WEINMANN et al. discuss.


BRITZ et al. present an enhanced version of the non-linear programming model CAPRI which covers the European Union, subdivided into 250 regions. The model is designed to predict the regional effects of the reformed CAP on land use distribution, as well as on commodity supply. In order to achieve endogeneity of product prices, the supply component of CAPRI is linked to a global multi commodity market model.
KÜPKER et al. present an analysis of expected consequences of the CAP reform by looking at the EU member states Germany and France. They apply the non-linear farm group optimization model EU-FARMIS which is based on farm level data. The expected consequences of the different reform implementation options, adopted by the two member states, are investigated on aggregate level, as well as for specific farming systems.


KUHLMAN et al. investigate at the national scale of the Netherlands, how farmers’ behaviour are likely to change in reaction to the new regulations. Probable changes in land use patterns are generated for two different scenarios by linking a macro-economic model, an agricultural sector model and a land use model via the so-called “land use scanner”. The multi-model approach is employed to ensure spatially explicit forecasts of land use systems which result from macro-economic and sectoral effects of the CAP Reform.
WEINMANN et al. apply the model ProLand, a spatially explicit land use model, using a different methodology to calculate future land use patterns. Site specific crop yields are treated as endogenous variables depending on site specific non-controllable growth factors, such as the available water (precipitation, usable field capacity) and solar energy (temperature sums). The land use projections can also be used as small-scale inputs to ecological and hydrological models, exploring the consequences for biodiversity and water balance.
ROEDER et al. discuss if and how the individual behaviour of farmers can be integrated into a regionally differentiated Linear Programming model, by using the example of three typical grassland regions in southern Bavaria, Germany. The model aims at maximizing the utility of individual land users. A land market model is embedded into the linear optimization model.


HAPPE et al. combine the models AgriPoliS and MODAM to generate responses of selected, heterogeneous farms to changes in direct payments. Associated impacts on the production of non-commodity outputs within a competitive and dynamic environment are also considered.


Finally SCHRIJVER et al. deal with the single farm model FIONA, looking at management options for dairy farms under a new Dutch agricultural policy instrument called “Farming for Nature”. Under this scheme no external inputs to the farm are allowed. Similar to the approaches by WEINMANN et al. and HAPPE et al., FIONA also generates quantitative information on multifunctionality indicators of farming systems.


In sum, this special issue provides a broad but certainly still incomplete overview of the state of the art in the field of
model building and expected land use changes in the year zero of the reformed Common Agricultural Policy. Numerous scales and methodological approaches are considered and employed. Obviously, there will be no single all encompassing model for the time being. Various “stand alone” models have to be used, as well as combinations of several models.


The editors of this special issue of “Agrarwirtschaft” – the German Journal of Agricultural Economics – hope that the contributions will trigger a fruitful discussion to the benefit of the scientific community and, for that matter, also to the advantage of the respective “consumers” in the field of modelling, and predicting land use changes and their economic and ecological consequences under a changing policy regime. 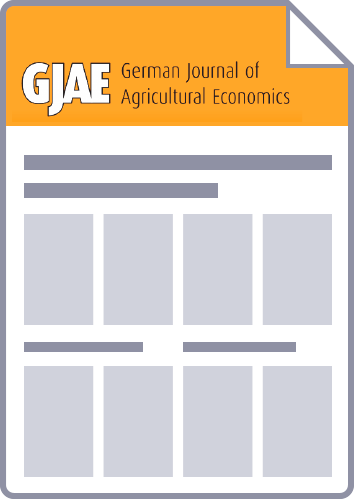 This is a free article. You can open it here.

The influence of climate change, technological progress and political change on agricultural land use: calculated scenarios for the Upper Danube catchment area